A/N: Thank you to Gort for the beta! This is just an itty-bitty thing, but if you want, you can squint at it and it fits into the Doomverse. Also, I'm going with the headcanon that Buffy was on her period in School Hard.

Thank you mods for hosting this little celebration and cheers everyone on 20 years of Spike! :-D

Notes: Okay, I'm opening, but I'm opening with a thing that people can participate in.
You know how I sometimes mutilate shooting scripts? This isn't one of those times. This time, I invite *you* to mess with a transcript. Instructions are under the cut.

Ok - no time to write something new, but this very short piece written waaaaay back in the day for someone (name on story, I think) is set in School Hard. It's all I've got that isn't just one scene in a much longer fic with no relation to SH. This scene stands on its own:

Voilá! A ficlet set in Chosen that calls back (urgently) to School Hard. It's Spuffy, but more accurately Spuffy-adjacent.

Title: Not In The Brochure
Author: Beer Good Foamy
Word count: 600
Pairing: Buffy/Spike... sort of
Summary: It's the end of "Chosen." Spike is burning up in the Hellmouth, and Buffy's holding on to his hand, unable to let him go without telling him... except Spike has something to tell her, too. And it concerns her mother.

The above link will take you to the author's site on Dreamwidth. Enjoy.

Not something I could miss - the beginning of it all for the Spuffy-inclined amongst us. In honour of the occasion this fic is new.

Juliet Mills, daughter of Sir John, sister of Hayley, was in the film Avanti! in 1972, for which she was nominated for a Golden Globe Award. She later went on to play the role of Tabitha in Passions. Spike couldn't have watched the soap in 1997, as it started in 1999, but I liked the idea of a little shout-out. 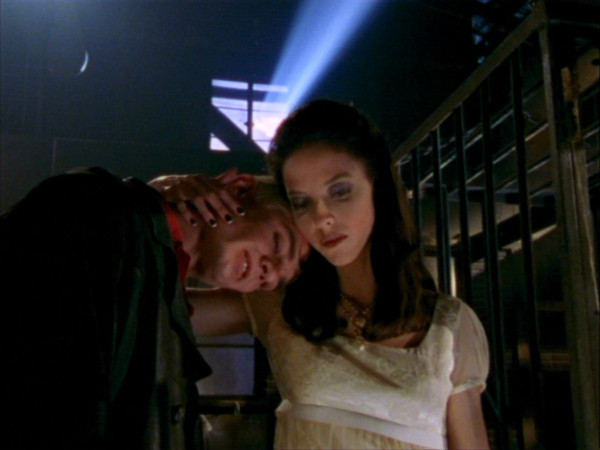 All belongs to Joss, but he did say we could play with his toys.
Rating - R for language (It's Spike), but otherwise PG13.
437 words
( Collapse )

Comments make me happy. So does thinking about Spike.
Collapse