Banners and Icons for Round 19

Once again, I want to wish the members and maintainers of

seasonal_spuffy a very happy 10 year anniversary! This was only the second time I've participated in the banner competition and I learned a lot about digitial editing and design via this project; and I picked up some skills and confidence I didn't have beforehand. Below is a selection of my banner alts, suitable for use in a story or website project, and of course some icons to go with.

(And if you don't like alts, or artists gabbing about "the process", simply scroll down to the pretty icons below. Because this post might be of greater interest to other artists than the general population. Or it might not. I'm just sayin')

[And sometimes I just need one of these.....]
How to make a Spuffy banner in 20 easy steps:
Click all banner images to view full-size:

1) Come up with a threefold design inspiration, in this case: the San Francisco setting of the S10 comics,

double_dutchess's banners and icons using comics imagery, and this Fuffy banner created a few months back with textures by

sweet_lyri: http://parabellum.allnightnoise.com. Decide to remake aforementioned Fuffy banner as a Spuffy banner. Quail at the thought because you don't remember how you got this exact look, you're a newbie when it comes to masking layers and you're terrified of making a bad manip. Procede anyway. 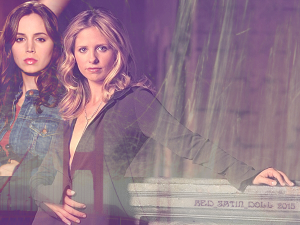 C
original: 600 x 450 pixels
2) Realize it won't work because you can't just stick an image of JM in there on top of ED and get the same "transparent" effect; never mind the fact that to do so would visually "marginalize" Spike in the banner. Scrap it and start from scratch, using screencaps from various episodes like School Hard, Never Leave Me, etc. 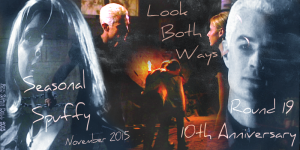 D
original: 800 x 400 pixels
3) Realize it's not working. Again. Scrap it and start from scratch. Again. Go to The Chosen Two.com to locate the best quality PR photos of James and Sarah, looking for two images that  might mesh well together - that would make it look like they were actually standing together in the same space and could be masked together without too much difficulty.

4) Select two shots from the S5 promo shoot by Greg Gershon that look good together in terms of body positions, line of sight and image quality; plus they also both feature dark brown backgrounds that will be easy to mesh together (because you're still a beginning when it comes to masking and joining image layers) Eyeball the masking on James' body to make room for Sarah's and amaze yourself when you get it pretty close on the first try.


5) Discover the power of the Clone tool (oh where have you been all my life? ) to fill in the gap between James' shirt and Sarah's body left by inexact masking, and merge the two backgrounds.

E - F
6) Realize you need to cover Sarah's bosom because it's damnably distracting and really not what you want to convey in this image. Worry that you'll be thought a prude. Remind your inner critic that prudishness has nothing to do with it; you're an out and proud lesbian and you love the female body but damnit, you hate that stupid little cami and her boobs just look weird.

7) Sift through dozens of photos of Sarah in every imaginable outfit looking for something you can cut easily and layer on.  Resort to sifting through photos of Aly Hannigan. Realize this is the single most difficult part of the entire project. Remember why you hate masking. Realize you may be slightly insane.


8) Locate a HQ photo of Sarah in a pretty sundress with a structured tube top bodice for an In Style magazine photoshoot (2007). Layer and mask the bodice, change the color with the Tint tool to match the straps of her cami, add an additional texture to make the fabric look more convincingly dimensional and voila. Sing halleluliah. Realize you accidentally let some of her original cami show through slightly around the edges of the bodice. Tell anyone who asks it's not a mistake but done to enhance the illusion.


9) Overlay a deep brown texture to conceal the distracting columns. Add some text and call it a day, right? Well, no. You see, this is where the real fun begins.

G - H
10) Return to your original concept of a San Francisco setting and attempt to add images of the Golden Gate Bridge* and comics artwork by Rebecca Isaacs and Megan Levins. Reflect on why you prefer Levins to Isaacs in terms of the emotional aspects of the season, but Isaacs for the pretty settings. Look at photo of JM and realize that both artists get Spike wrong and get him right, but in very different ways to each other. His cheekbones really do look like shelf brackets (Isaacs) and his nose actually does have that blunt shape (Levins).

I - J
11) Realize that nobody has gotten SMG as Buffy right, not counting Jo Chen and Steve Morris' cover art; although Levins at least gets the "cuteness" down...and that Gage is wrong, wrong, wrong about Buffy and Spike's supposed relationship patterns. Consider writing a letter to the editor.


13) Realize that comics illustrations  do not mesh all that well with photos of the actors. They just don't - because the flesh and blood people are so much more interesting, compelling, magnetizing, even in photographic form, and comics illustrations only remind you of what's missing. Console yourself with Spuffy cuddles, sexytimes, and kittens while you rethink concept.

K - L
14) Go back to the idea of using screencaps. Think about your favorite Spuffy moments. Decide that

comlodge's Touched banners are so sacrosanct because she captured everything you feel about Spuffy in that episode that you can't consider using that moment. Turn to one of your other favorite moment in the series, the end of "Showtime" (banner A). Add a second star texture to add warmth and mask the edges of the images. Sigh happily.


15)  Add an image from Harsh Light of Day to visually convey the journey Buffy and Spike have taken from mortal enemies to friends, lovers, partners (with some serious road bumps along the way. Did we mention the mortal enemies part?)

M
16) Try to decide which variant to enter in the 10th anniversary banner contest, throw up your hands, and ask your beta-Muse the most excellent

velvetwhip to choose...the version you were sort of leaning towards already but too chicken to make an actual decision about.


17) Watch as the banner that should have won wins the competition. Sigh in relief because this means you won't have to scold people.


18) Read issue #20, decide it's your favorite issue of the comics this season (any season, period?) and incredibly, Gage gets it right. Think, "Damn it, if this had come out before the competition I soooo would have included that Spuffy Hug."

N - O
19)  Give in to temptation and add that Spuffy Hug, because it makes you happy.
20) Realize "Crap, I forgot to make icons."  So, make icons.  Realize there are people who can do a much better job at making icons. Do it anyway.
ICONS:


See, now wasn't that easy?
* I confess I don't know who made the lovely image of the Golden Gate Bridge beneath a full moon (I, J, N, O). I found it at pcwallart by googling "golden gate bridge night moon". I've seen snippets of the same image at pinterest but no indication who the original artist is.

The photo in G is another stock image I found online and mislaced the original source.

A Vague Disclaimer is No One's Friend:
~ DO NOT RE-POST TO OTHER SITES (INCL. FANPOP) OR LJ COMMUNITIES WITHOUT MY PERMISSION!
~ Take what  icons you like for personal use but please credit if used :)
~ No hotlinking!
~ Comments however are appreciated :)
~ All artwork by yours truly except where otherwise indicated.